Mallika Sherwat has just returned to Mumbai after a globe trotting spree.

The actress arrived in Mumbai a couple of days ago from Malaysia where she was invited as a guest speaker at the Global Brand Forum 2008, which was held in Kuala Lumpur last week.

Mallika was a part of an expert panel where she shared her thoughts & comments with personalities like renowned Hollywood filmmaker Oliver Stone & Dato' Farah Khan, President of The Melium Group, which is into the retailing and brand managing of international lifestyle and fashion labels.

The actress impressed everyone present at the discussion with her insightful & original views about the exciting challenges and opportunities facing the movie business and the impact of Indian films in brands and business.

The discussion was moderated by none other than celebrated international TV interviewer Riz Khan. 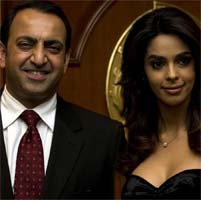 Says a delighted Mallika; "It was a huge surprise for me to be invited to the global forum along with Oliver Stone - What do we have have in common, I asked myself. I guess for better or for worse we both have our own brands - and as Oliver Stone says - people either love or hate his films, but certainly have a strong opinion about him, his politics and his films."

I guess its the same for me - there are young people around the country who have embraced me, and on the other hand there are lots of people in the country and in the film industry and in advertising who think I'm too controversial, radical etc., for their liking", she adds.

"Besides that he has a genius who has achieved so much and I've just begun my tough climb. But to share the same stage with someone who's made JFK, Platoon, Natural Born Killers and U Turn - All I can say is Wow!", she says visibly excited. 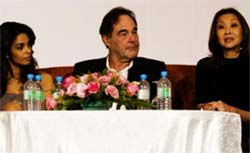 The Global Brand Forum is Asia's leading organization dedicated to thought leadership, bringing the world's most inspiring and influential leaders to Asia.

The actress is currently working on 'Hissss', a Hollywood-Bollywood film directed by famous Hollywood director Jennifer Lynch. The actress will be seen essaying a never-before seen role of a snake woman.