View Profile
Mallika Sherawat now will be seen playing a Nagin (snakewoman) in her next release, Hisss.

Hisss is directed by Jennifer Lynch of Boxing Helena (1993) fame, which incidentally won her a Raspberry award for the worst director for the movie in 1994. 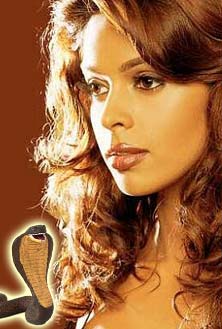 Featured Video
Seemingly this does not augur well for Hisss on the face of it. But, Hisss' costume, make-up, and special effects teasers have generated a lot of interest. Looking at the images released, one can definitely tell that this is not your standard Ramsay, or even Ramu (The Factory) horror film. Costume quality and makeup in the Hiss are definitely on Hollywood standards. We hold our judgement though on that ridiculous name Hisss - who chose that, some assistant director to the Ramseys?
The producers, Vikram Singh and Govind Menon, have roped in Robert Kurtzman, known for his expertise in make-up, special effects, and visual effects. Kurtzman has won the Saturn award in 1999, for make-up in the movie Vampires.
Mallika Sherawat is best known as the hottest bod in Bollywood. Mallika Sherawat was last seen in Maan Gaye Mughal-e-azam and Ugly aur Pagli, both of which were box-office disasters. She has also acted in The Myth with Jackie Chan.
Mallika Sherawat's look has been crafted quite painstakingly in Hisss. In the movie, Mallika Sherawat has to wear huge contact lenses that even cover the white of her eyes. Mallika Sherawat has to take out the lenses every few hours to let her eyes breathe. The elaborate nagin elaborate costume has to be kept on for 8-10 hours at a stretch, and she has to be carried around. Mallika cannot drink water or go to the loo during those 8-10 hours.
Mallika Sherawat does not have any other films in her kitty right now, except the recently announced Unveiled. The other movie she was supposed to apppear in, Fauj Mein Mauj, has been shelved. Hisss is very important to Mallika's career, in that sense.
Hisss revolves around a vengeful nagin (Mallika Sherawat), who shape shifts into a gorgeous woman and goes to the city to hunt for her mate, who has been captured from the jungle by an American, George States. Hisss also stars Irfan Khan who plays a cop who has to track her down to stop the destruction she unleashes in the city.
The vengeful nagin theme has been very popular in Indian cinema, with more than a dozen movies made on snakewomen, between 1925 and 1990. What is common among all the Nagin movies is the horrendous make-up and equally terrible special effects.
With good production values, Hisss might actually do justice to the tired theme. The last woman to play a Nagin in Bollywood was the sumptuous Sridevi in Nagina (1986). Nagina was a huge hit and even had a sequel.
Hisss will be released sometime the latter hald of 2009.