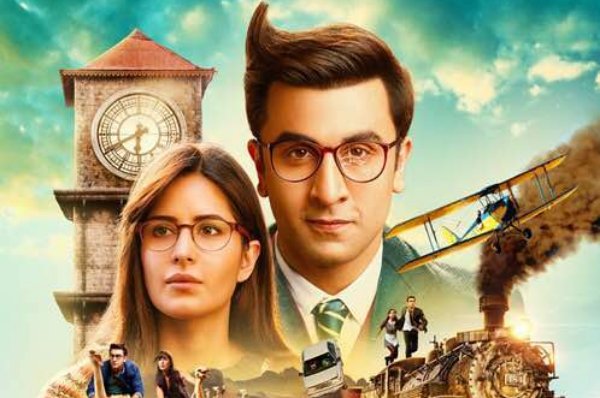 The makers of Jagga Jasoos who earlier treated the audiences with the musical world of Jagga are set to release the theatrical trailer on 29th of June.
The film will feature Ranbir Kapoor and Katrina Kaif in a never before seen avatar. The earlier released content was a 2.44 minute clip giving us a glimpse into the world of Jagga Jasoos.
Right after treating the audiences with the insights of the world of Jagga Jasoos, the makers then unveiled various behind the scene videos.
One of the behind the scene video showcased director Anurag Basu, lead actor Ranbir Kapoor and Katrina Kaif have a fun encounter with the elephant on the sets. Whereas another video showcased seagulls attack the sets of the film.
Not only the videos but also the new poster of the film effectively encompassed the ups and downs and many adventurous moments that Ranbir aka Jagga and Katrina aka Shruti indulge in.
The songs Ullu ka Pattha and Galti se Mistake garnered humongous response across the quarters. Anurag Basu is leaving no stone unturned and is set to use yet another ace up his sleeves by releasing the all-new trailer for the film.
The film is an adventure drama where Ranbir's character is on the look for his missing father. All of these have left the masses in complete anticipation.
Disney and Pictureshuru Production's Jagga Jasoos directed by Anurag Basu is set to release on 14th July 2017. The film stars Ranbir Kapoor and Katrina Kaif in the lead with music composed by Pritam.
0 Likes