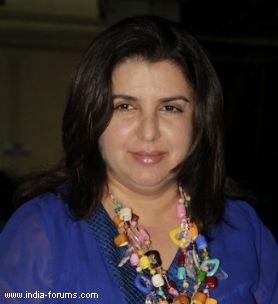 It was on this day 10 years back that choreographer Farah Khan's debut directorial "Main Hoon Na" hit the screens. She can only look back at her pool of memories with a smile.

She also thanked her friend and superstar Shah Rukh Khan who played the lead in her film.

"Thank you Shah Rukh Khan for changing the course of my life. In sooo many ways with MHN. You in a wet white shirt, under a waterfall my darling, was my gift to all the women in the world!"

"This scene was the first day of shoot for Sushmita Sen and the first time she wore a sari on screen," Farah tweeted along with a picture of Sushmita's introduction scene.

The film set the platform for Farah and she next directed the superhit "Om Shanti Om" in 2007.