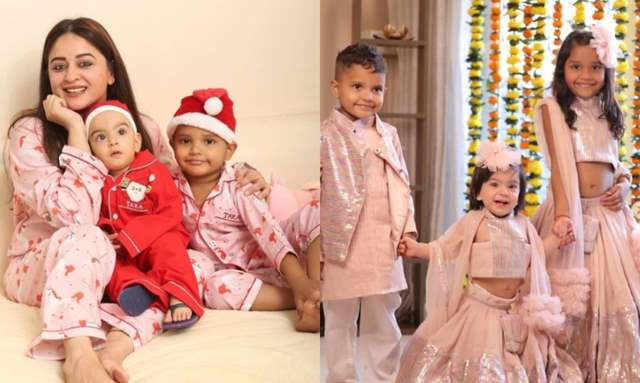 Mahhi Vij and Jay Bhanushali are parents to two lovely kids, Khushi and Rajveer. The two decided to adopt the kids as they turned foster parents to them and from time to time, they have treated fans with adorable family photos. Soon, there was another addition in the family as Mahhi gave birth to their adorable baby girl, Tara.

While there has been a lot of trolling that the couple has been subjected to, this time around, Mahhi decided to clarify things once and for all. As they have been questioning her about why Khushi and Rajveer have been missing now that they have Tara, she penned an open letter, asking everyone to stop while also giving a clear picture.

She wrote, 'A lot of you have been questioning, a lot of you have been assuming, a lot of you have been writing anything and everything and its just NOT FAIR! Yes we are parents, FOSTER parents! Tara entered our lives as a beautiful blessing but that doesn't change our feelings for Khushi and Rajveer. When Khushi came into our lives, we became parents but a part of us knows that the decisions and the first rights belong to her father and mother. They had always wanted the kids to spend some time in Mumbai but eventually return to their hometown and be with their extended family and grandparents. As we feel that there is no one who can judge what is better for a child, than their parents.'

She concluded by saying, 'We hope all your questions and assumptions are rested for once and all! lease bless our children, wish them well because that's all we want, positivity and Good Karma!'

After rise in COVID cases, IFTPC issues a letter to TV producers

Shagun Sharma on choosing Ishq Par Zor Nahin and characters that had ...

+ 3
1 months ago She shouldn’t have needed to write this. Jay and Mahi both opened their hearts to children who aren’t their own. Aaj ke zamane mein bhi there are very few who will care about the children born from others. But no, of course there will be jobless people who want to troll others doing a good deed and pass comments on their life. Internet cheap hai iska matlab yeh nahi ki kisi ko kuch bhi bol do screen ke peeche chup ke. Much love to people like Mahi and Jay ❤️ May your tribe grow and prosper