Mumbai, Feb 13 (IANS) Mahesh Bhatt has decided to return to direction 10 years after the searing 'Zakhm' to depict the life and teachings of his spiritual guru U.G. Krishnamurthy. The veteran director plans to present it as a documentary.

'I suspect I'd rather make a documentary than a feature film on UG. My desire to manufacture illusions has ebbed. I don't want to mystify him. UG was a human being. Fiction and films tend to exaggerate. And given a choice I'd rather do a documentary that is far truer to the truth about the person,' Bhatt told IANS. 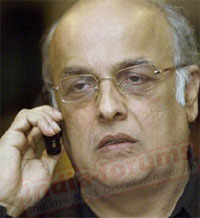 To put his thoughts on celluloid would be his most ambitious project to date. For one, the film will be in English.

'If the film will ever be made, it'd be in the English language. It has to be in a language that would reach out to the maximum number of people. I want UG's teachings to be universally accessible, hence my decision to return to direction. But first my book on UG, which is ready to come out,' said Bhatt, who is a life-long devotee of UG's beliefs.

'I'm hoping the book will end the fire within me to put the truth about UG in front of the world,' added Bhatt who is a life-long devotee of UG's beliefs.

The book entitled 'U.G. Krishnamurthy: A Life' releases in August.

'It's the story of those glowing hours that I spent with him. It's a story that has to be told. But before the movie, it has to appear in print. This tale of the cosmic terrorist, who lived and died alone, is a spectacular story. I hope I can tell it effectively.'

The never-say-die creator has seldom sounded so nervous and anxious in recent times.

Elaborating on the book, Mahesh said: 'It contains a section of my diary jottings entitled 'Taste Of Death'.'

He plans to write another portion of his diary jottings entitled 'The Taste Of Life'.

The big question about the movie - who will play the spiritual healer? 'I guess my gaze has to go beyond Indian shores. It has to be cast properly or the film dies stillborn.'