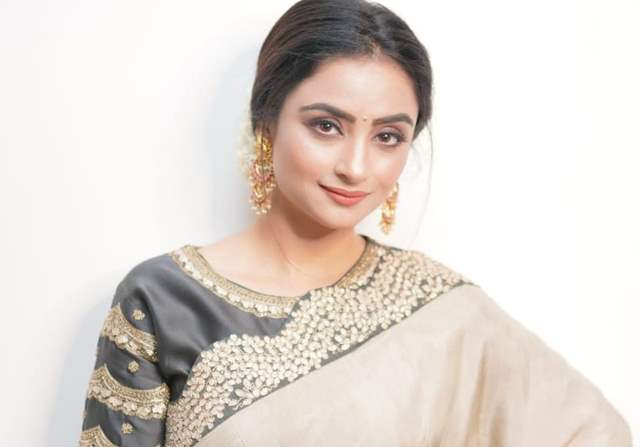 An actor goes through a lot to make his/her role believable and relatable. Sometimes actors go through a major transformation for a role sometimes they play with their voice to get into the skin of their character.  Madirakshi  Mundle who essays the role of Paravati in Sony Entertainment Television's Vighnaharta Ganesh would be the narrator for the upcoming track of Ashoksundari, Mansadevi and Jyoti. In the current track the audience would be watching how Lord Shiva’s bhakt Chandradhar is unruffled by various challenges on his way to Shiva temple.

Majorly in the show, Lord Ganesha is seen narrating various tracks, but this time Lord Parvati would be the narrator for the upcoming track. The upcoming track is about Lord Shiv’s daughters Ashoksundari, Mansadevi and Jyoti. Madrakshi was seen practicing various voice exercises so that during the recording, her voice come out more clearly and strongly as a  narrator .Not only that she was also seen having hot water twice -thrice a day so that her throat is perfect.

Madirakshi  while telling how she prepared to be the narrator said “This would be the first time I would be doing narration for Vighnaharata Ganesh , mostly all the stories are narrated by the actor who plays Ganesha. I was excited as I believe the narrator plays a very important role in any story as he or she is the one who initiates the story and then it is taken ahead. For the preparation I have been practicing some voice exercises and drinking hot water regularly,  as during the recording my voice should make an impact among the audience for the track.

Saiyyonee out now: Asim Riaz and Shivaleeka look picturesque in this ...