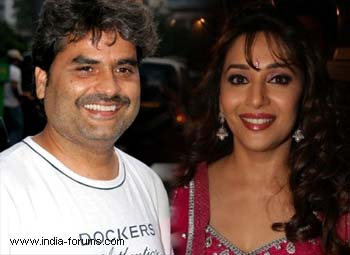 Bollywood diva Madhuri Dixit has confirmed that she will play the lead in Vishal Bharadwaj's "Dedh Ishqiya".

"Hey guys, back in action. On set for Star's 'Life OK'. Am doing 'Dedh Ishqiya' and 'Jhalak...' is right around the corner. More to come! Thanks for all ur patience and support!," she posted on her Twitter page. The sequel retains Naseer and Arshad in prominent roles.

In 2007, Madhuri, who is married to US-based Sriram Nene, was seen in the film "Aaja Nach Le", after which she shifted back to the country. The actress returned in 2011 to be a judge on dance reality show "Jhalak Dikhla Jaa". And later decided to shift permanently to India with family.

This will be Madhuri's first film after shifting back to India.

+ 4
8 years ago Oh this is great news! WOuld love to see Mads back on the silver screen.

8 years ago Madhuri Dixit Nene is not liked by Indians. She is LOVED by Indians!!.

+ 6
8 years ago m so so happy with this news, she now chose the right film, waiting to c her back with a stalwart like naseer. Thx fr sharing

+ 5
8 years ago All the best Madzzz but I really hope the role is fit for her b/c the dhak dhak girl is one of the finest! This year will be amazing..we have Karishma, Rani and Mads all coming back wit a bang!