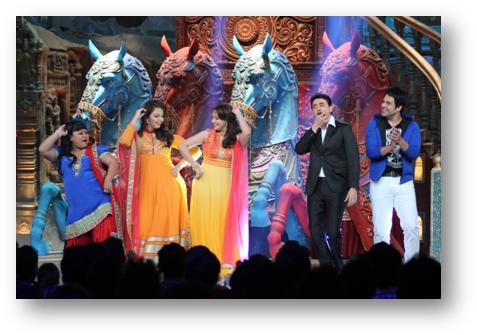 Mohini!! Mohini!! Mohini!! resonated on the sets of Comedy Circus Ke Mahabali as the gorgeous Madhuri Dixit Nene made an appearance on the show with her co-star Huma Qureshi to promote her upcoming film 'Dedh Ishqiya'.

The episode was dedicated to the stunning actress as it was for the first time that the actress visited the set.

It will be a delight for the viewers to watch the stunning actress on a comedy show.

+ 3
10 years ago I love Amrita but seriously with Tusshar? He is nor good looking nor a good actor!

+ 6
10 years ago i love amrita rao, and she looks real cute in this movie, but hate what she is wearing in the pic.. tusshar on the other hand, looks one of his best so far, and i hope his and amrita's jodi rocks in this rajshri movie..

+ 6
10 years ago dear lord what is she wearing? someone fire the costume designer of this movie!

10 years ago Don't think shahid n amrita will. Be in anything soon. Good to see her back tho. Hope the movie does well