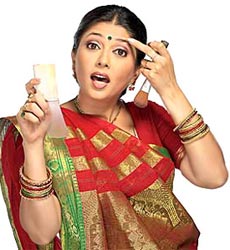 Lubna Salim, popular for her character of Leela Bhabhi in the Hats Off show on Star Plus, Baa Bahu Aur Baby will not be seen in the second edition of the show..

There is some good as well as bad news for the ardent viewers of Baa Bahu Aur Baby!! According to our source, "The shoot for the second season of the show has started in full swing, but Lubna Salim will not be part of it".

We called the actress to confirm this and she said, "Yes it is true that I am not doing the show anymore. I have given four years to the show, and was doing the same thing. I was not offered variety in the role, and the fact that there was a certain limit to Leela Bhabhi's character did not give any room to try out something new. This was a mutual decision taken by me and the production house".

Lubna is now busy doing her modeling assignments, and has also worked in two short films. Ask the talented actress about her next venture in television, and she says, "I am going on a break for four months. I want to spend time for myself, and wish to shop a lot and enjoy. I will look for new offers after I get my deserved break".

Lastly our source says, "The second season of Baa Bahu Aur Baby will launch sometime in August, but the date is not finalized. The good news is that the show will now be a daily".

As we wish Lubna all the very best, we look forward to the popular show's re-launch…

13 years ago i don''t think i will be able to watch the show without Lubna Salim playing Leela...


look what i found!
www.lubnasalim.blogspot.com

ajus009 13 years ago I think it would be better if the show remains on weekends as when it becomes a daily it will be dragged too much and the humourness will be lost. We can see it Bure Bhi Hum, Bhale Bhi Hum.

+ 3
13 years ago i agre with u isntant khicdhi: Khichi was good but isnt K wasnt that good..