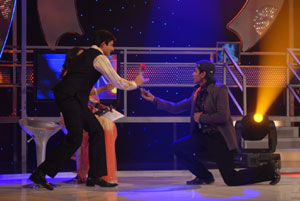 The Galas this week gets more Musical as the Theme for this week is ‘Love’. Its now time to get ready to witness an evening of Great Music and Great Performances, with our contestants giving the Audience and their Fans a ‘Song-Fiesta of Slow and Fast Romantic, Love Numbers’. So fasten your seat belts as the participants will look more adorable, cute and sizzling as they are dressed in their formal best and performing like never before.. 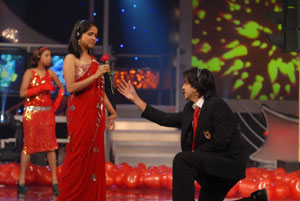 The mood for the evening will be set by the opening number “Signal, Pyar Ka Signal” as all the contestants shake their foot to this fast number.. The mood of the contestants accompanied by the heart shaped balloons, misty smoke and bike rides on stage set the tone for the romantic evening filled with ‘Love’ songs. What’s more, all the judges sang a line of their favourite number with Javedji singing, “Abhi Na Jaoo Chodkar..” in a very unusual way! 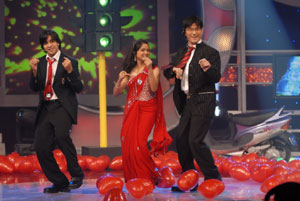 Moving over to the contestants, Emon set a benchmark for the performances with a "Is pyar ko main kya naam doon… " .Amit stole everyone’s heart with “Pehla Nasha”, while Parleen was romance personified with “Mere Khayaln Ki Mallika” and Abhishek set the stage on fire with his “Roop Tera Mastana” number. The girls too matched the boys song to song ad Ankita again lead them from the front with her “Suraj Hua Madham”…


Well, well, when Romance is in the Air and the Theme is “Love”, how can one leave the Man who has given us Innumerable Romantic Melodies, Annu Malek? The channel did a sting operation on Annu Malek who is known to have hidden many skeletons in his closet!! A pretty woman reveals the love story that Annu has been hiding all these years! 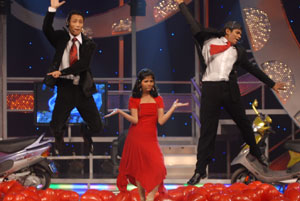 The concern on the Judges’ faces that has been looming large oflate, is the disturbing trend seen in the Voting Pattern. Annu Malek did not mince words when he pointed out that deserving contestants are being eliminated while those who should have rightfully gone still continue to be on the show. Javed Akhtar advised all viewers to rise above region, caste and creed and vote purely on merit while selecting a contestant. 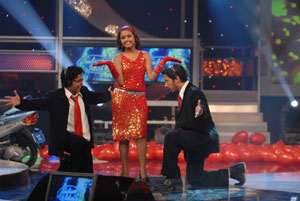 Now that the Country has its First Woman President in Pratibha Patil, can we all say “It is Time to have a Woman as the Next Indian Idol?” Will this strong bias in the voting end this week? Week after week, we have seen a girl going out of the Galas, will this week be any different? Is it really true that “Women are their own worst enemies?” Come on Friends, Indian Idol has reached a very crucial phase in its run to the finish. It is for all viewers to find that one voice, that they can proudly claim to have discovered.


Enjoy the Fragrance of Love this Friday on Indian Idol at 9 pm only on Sony Entertainment Television...

14 years ago thats good for her
but couldnt she get a bigger house for that price?

+ 4
14 years ago wow i can't wait for tomorrow!
sounds like the show is going to be really fun

14 years ago I have to see this! Love as a theme is always a good thing, but I don't like most of the songs named that the contestants will sing. As for a girl winning Indian Idol, I would want Deepali to win!