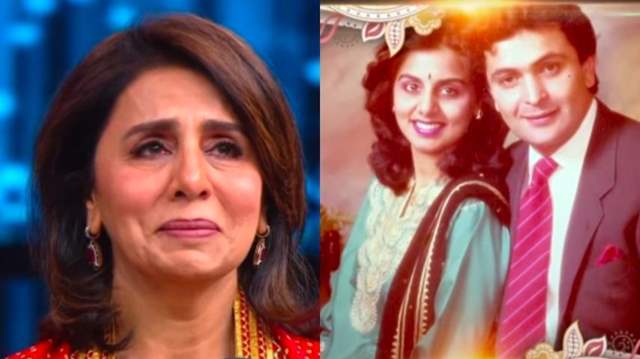 It has been two years ever since the tragic death of famous actor Rishi Kapoor and even today, his loved ones, fans, and friends continue to grieve his loss. On the second death anniversary, his wife Neetu Kapoor and daughter Riddhima Kapoor Sahni sent touching tributes to him on social media.

Neetu, who is a judge on a dancing reality programme, tweeted a video of herself crying on stage as she recalled her 45-year companion. She described losing him as "tough and heartbreaking."

The veteran actress took to her Instagram handle and penned a heart-touching note for Rishi Ji, which will definitely moist your eyes.

"Today is two years since rishi ji left us … loosing a partner of 45 years was difficult n painful at that time the only way to heal my heart was to keep myself mentally occupied .. Movie n television heldped me achieve that rishiji will always be remembered n will stay in everyone’s heart forever." In the video, she is seen getting emotional and sharing that everyone she meets, has a story related to Rishi Kapoor and it reminds her of him a lot."

On the other hand, Riddhima shared a precious childhood photo with her Papa on the second anniversary of his departure. A young Rishi Kapoor can be seen carrying his baby girl Riddhima in his arms in the childhood photo. Riddhima captioned the picture with only one word, 'Papa,' and a heart.

Rishi Kapoor had been battling cancer for nearly two years and was receiving treatment in New York. In 2019, he returned to India and resumed employment. In 2020, however, his health deteriorated, and he died on April 29, 2020. Sharmaji Namkeen, his final film, was published on Amazon Prime Video on March 31.

We at India Forums remember one of the finest actors of Bollywood,

"You left a legacy and lots of memories for us"