Amitabh Bachchan's fans, worldwide have pulled the craziest stunts to impress the star. But here is actor Sudesh Berry whose gesture of awe towards Amitabh is subtle and discreet. He took up the role of Loha Singh, a character who hails from North India, in the Zee and Swastik Pictures show Agle Janam Mohe Bitiya Hi Kijo, so that he can speak with a bhaiya accent like Amitabh did in some of his super hit movies. 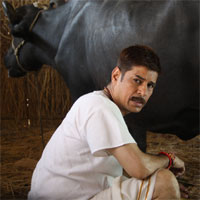 Featured Video
Sudesh says, "I'm a hardcore Amitabh Bachchan fan. And I admired his works in films like Ganga Ki Saugandh where he speaks with a bhaiya tone. I always have wanted to reproduce his actions with my own twist added to them. So I'm very happy that I got such an opportunity as Loha Singh."

Sudesh is fascinated by the richness of language that our country has to offer. He says, "You know there is Mythili, Bhojpuri and many other dialects of the same language- Hindi. People from towns and cities may not come to know the difference but the natives can tell within seconds what type of language one is speaking."

In spite of being appreciated for his portrayal of a rustic character ,Sudesh plays it down by saying, "I have not perfected the behavior of Loha Singh. He is not behaving hundred percent like a village man and probably the rurals must' have realized this. But they have given me some leeway and have accepted me. Even the urban audiences have accepted me so I'm just thankful for it."

13 years ago he is very good actor and superb in agle janam..

13 years ago An heir is important to him and his family. Their must be an heir to carry on the name. So he is what we would call a don't care a dame kinda of man, in the sense of we get what we want at any cost.
His character is strong and mean and althoug I don't agree with his character I can't help but admire the effort he has put forward to make his character so not likable.

+ 2
13 years ago Sudesh Berry is awesome in portraying this character - crude and overbearing with his 'my way or the highway' attitude. He does a great job in delivering his dialogues in the bhaiyya accent - some of them are hilarious.

+ 3
13 years ago sudhesh berry is such an amazing actor he is juz so gud as loha singh i hv never seen such a character ever in indian television for me he is even better dan AB well loha singh rocks as welll as agle janam ;)

13 years ago loha singh is really a unique character! never saw a man like that lol! he is crazyyyyy and mad

14 years ago hmmmmm i wonder who is acting opposite from him?? and i cant wait to see the movie