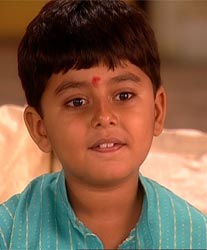 In this competitive world of television, every single actor has to strive hard to gain recognition and fame!! But once popular, there is every possibility of being talked about even for trivial matters happening in life, and this is what little Siddhartha of Raja Ki Aayegi Baraat fame experienced recently!!

The news of Siddhartha aka Munna of the Star Plus show suffering from high fever and being hospitalized, spread like wild fire and all in the media circle tried to enquire about the child's health in their own way!!

However, when we called the boy's mom Soumya Gupta, she rubbished all news of her son being admitted to hospital. "Arre bachche ko toh choda karo!! He is just suffering from viral fever, and has been unwell for two days. He had not been admitted to hospital even for a single day. In fact, the show required him to shoot for a Raksha Bandhan episode recently, and he completed his shoot. I have now requested the scheduler to give him a break from shoot, as he has his unit exams coming", verbalizes the mother.

arabian_love 11 years ago i like this boy , awesome acting of him in rkab

preet14 11 years ago aww.sometimes the media is so rude and i dunno stupid

js452 11 years ago get well sooon siddarth!!! we love u as munna and hope that u come back with a bang after doing ur exams...good luck!!!

Faiza_sam 11 years ago Aww........baby get well soon...we are missing you in the show but good to hear that we will see you on Raksha bandhan episode...good luck for your exams...