View Profile
You may have spotted him in a watch advertisement alongside Aamir Khan and adored him as Pappi in Star Plus' Sabki Laadli Bebo. But there's more to Azaan Rustam Shah than just a cute face.

He holds the record for having worked in the maximum number of projects for an eight year old. He has worked in 10 serials, 2 movies, 3 documentaries and 10 television ads. 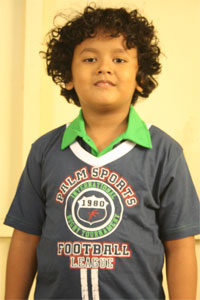 We spoke to Ayesha Shah, Azaan's mother to know more about this little packet of bubbling talent.  She says, "Since the time he learnt to talk, he has been imitating people. We didn't know how to react at first. Only later realized that maybe this is a real talent our son has. Another thing was that whenever television soaps would go on, like Kyunki Saas Bhi Kabhi Bahu Thi, he used to get attracted so much to them."

Ayesha talks of the first step Azaan took towards acting. "When we got a call from Jamu Sugandh's office we thought why not give a try as he seems to have a potential. His work in Johny Gaddar was highly acclaimed and then we started getting offers for television shows. Now Ekta Kapoor ji is very fond of him and tries to take him in many shows."

Ayesha makes it clear that there's no pressure on Azaan whatsoever. "We never force Azaan to work. His dad always asks him if he wants to do the next project. He explains the story to him and asks if he is interested and Azaan says that he is very much interested to do it. In fact, now during his vacations I have given him an entire week to do what he pleases. No swimming or dance classes whatsoever. But he keeps asking me, why are there no shoots lined up for me. When are you taking me to the next shoot?"

Does Azaan give a hard time at shoots? "No, in fact Azaan is very well-behaved and even at 3am in the morning he is enthusiastic about giving his shots. He is very happy to be acting," Ayesha asserts.

Ayesha further tells us, "Azaan's father (Rustam) feels very blessed. According to him, Azaan is carrying out his unrealized dream to be an actor. Both father and son share a great relationship. They are always together and bear a striking resemblance to each other. Rustam is the one who trains Azaan for his character and helps with the dialogue delivery."

Talking about his interests Ayesha says, "Azaan is very fond of cricket and his favorite cricketer is Sachin Tendulkar. He was very happy recently when he got to essay Sachin only for a special episode in one of the news channels.  He also loves the study of planets."

With so much on hand does Azaan miss out on anything? "No, in fact, he gives his 100% to all of the extra-curricular activities at school apart from studies. That's why all the teachers are fond of him," she chuckles.

Little Azaan has been part of serials like Kasamh Se on Zee TV, Meri Awaaz Ko Mil Gayi Roshni on Star Plus, Kis Desh Mein Hai Meraa Dil on Star Plus, Kahaani Humaaray Mahaabhaarat Ki on 9X, Kuchh Is Tara on Sony, Kayamath on Star Plus, Ek Packet Umeed on Imagine, Shree on Zee TV, Vicky Ki Taxi on REAL TV, Sukh By Chance on Sony. He has Johny Gaddar and Kaminey in his credit when it comes to films. He has also been part of a very popular documentary movie for Subhash Ghai's Whistling Woods. He has been part of ads for Videocon, Maggie, Frooti, Kent Purifier, Tiget Biscuit and many more.

Azaan sure gives a lesson on making good use of our energies!

azaanshah 10 years ago Azaan had played a character of ujwal sister son.

10 years ago Who was he in sukh by chance i dnt remember him:S:S:S:S

10 years ago wow so intelligent boy,,, way to go
Best of Luck

10 years ago i just love this boy....
he takjs soooo sweetly...
specially in kayamath...he was shooooooo cute~!~~