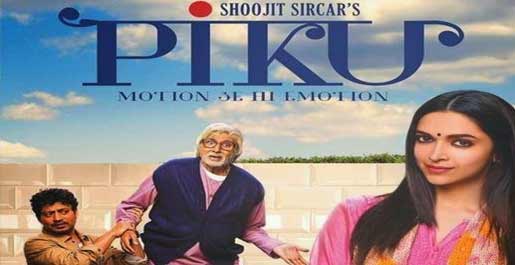 "Masterpiece" and "Superb" have been used by movie buffs to describe the slice-of-life family entertainer "Piku". If the Shoojit Sircar-directorial has impressed the film fraternity, it has also struck a chord with masses.

"Piku", which released on May 8, explores relationship between a father (Amitabh Bachchan) and a daughter (Deepika Padukone).

And like the stars, the masses can't stop praising the medium budget film, which has minted over Rs.25 crore in its opening weekend.

"@ShoojitSircar - My parents are raving about #Piku. My dad said it's a masterpiece... thnx for bringing smile on their faces #pikuthefilm," one user Pritish tweeted.

Another user, Rini Chatterjee posted: I watched #Piku on Friday. Still thinking bout it. Some things really impact your life in a positive way.

Mudit Singhvi said: @SrBachchan and @deepikapadukone are the heart and soul of the film. Master story telling by @ShoojitSircar and @writeonj. Superb!! #Piku

Swapnil Belorkar added: @ShoojitSircar Sir, you are really a gem of bollywood. What a direction no words for it. Take a bow. #Piku

In an interview with IANS, before the release of "Piku", Irrfan Khan, who plays an owner of a taxi service company in the film, said more than the box office collection, it's important that a movie should hit the right chord in the viewers' mind.

"'Piku' is a film with different kind of entertainment. It's not just about box office collections, it's about telling a story which will stay with you for a long time."

+ 4
6 years ago Piku is such an amazing movie.
I feel like watching it again and again.

+ 3
6 years ago Piku is a must watch! After a long long time watched a movie that touched my heart.