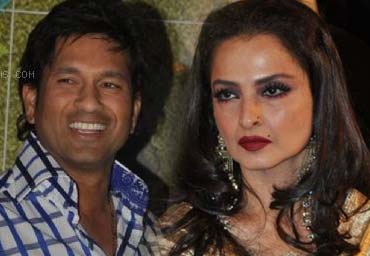 Lata Mangeshkar says she was not so comfortable when she was nominated to the Rajya Sabha in 1999. But the singing legend thinks that two of her favourite personalities - actress Rekha and cricketer Sachin Tendulkar - would perform better than her.

"My tenure in the Rajya Sabha was anything but happy. I was reluctant to be inducted into parliament," said Lata.

"In fact, I pleaded with those who urged me into Rajya Sabha to let me off. Though I had the highest regard for (Bharatiya Janata Party leader) L.K. Advaniji and (former Prime Minister) Atal Bihari Vajpayeeji, I still do - I am not affiliated to any any political party. What did I know about politics? I'm sure Sachin knows more about politics than me," she added.

Lataji is quick to point out that the ace-cricketer must have a game-plan for entering politics.

"I'm sure Sachin knows what he's doing. He won't be a novice in parliamentarian affairs the way I was. And as I said to someone jokingly the other day, if all fails, he can show some good batting moves to his fellow-parliamentarians."

Lataji shoots down the misgiving about Sachin's oratorical skills in parliament.

"Why are people presuming that he is only a master of cricket? Sachin is a widely-read widely-travelled individual. And parliament needs people with an open and fresh approach to politics. With me it was different. I live only in the world of music," she said.

Lata feels that the late Nargis Dutt was the right parliamentary representative from the film fraternity.

"She had a natural gift for oratory. I don't. Nargis could speak on any and every subject. She was outspoken and fearless. She was able to effectively raise issues regarding our film industry in parliament.

"I was often asked why didn't I address problems related to the film industry in parliament. In my defence, I can only say I was not connected with the entertainment industry to the extent that I could raise my voice against its problems. I am singer, not a speaker. Maybe Rekha, who's now in parliament, would be better able to bring up the problems that plague the film industry."

Lata hopes Sachin would be given a chance to prove his abilities in the Rajya Sabha.

"I was criticised and censured by people within and outside the film industry for not attending parliament sessions regularly. But during that time, when I was in parliament, I was busy with numerous recording and I was unable to fly back and forth between Mumbai and Delhi. In fact, I was very clear on this issue from the outset. But I wasn't spared. I hope Sachin's colleagues would be kinder to him," said the 82-year-old.

"I can proudly say that I never took any of the perks and privileges that were given to me as a parliamentarian. I didn't get an official home, a phone or cooking-gas connection and other advantages. And every penny of the grants that were given were used for the people they were meant for.

"I can vouch for Sachin's integrity. I hope he makes a success of his tenure in Rajya Sabha. As for me, if I'm given a chance to return to parliament I'd firmly turn it down with folded hands. I wish Sachin all the best in parliament. He would need it."