Deeepika Padukone and Lara Dutta are shooting for Sajid Khan's 'Houseful' at the moment and both believe they've the best role. 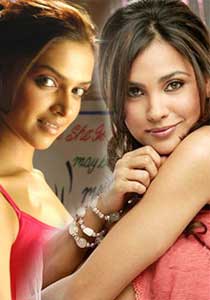 Featured Video
film has Deepika, Jiah (Khan) and me -- three girls. But mine is a great role. It's the strongest role among the females,' Lara told IANS.


So where does that leave Deepika who was recently seen in the hit movie 'Love Aaj Kal'?


'Deepika is the main female romantic lead. She has most of the songs and romantic scenes with Akshay Kumar. Lara has a stronger role in terms of the dialogue and the comic sequences,' said a source.


'Houseful' is a comedy of errors apparently inspired by Hrishikesh Mukherjee's 'Chupke Chupke' about a house filled with characters coming and going and creating a commotion of mistaken identity.


A diehard Hrishi-da fan, Sajid, who had acted in the veteran director's last film 'Jhooth Bole Kawwa Kaate', has given Akshay a role that echoes Dharmendra in 'Chupke Chupke'.


And if Sajid is a diehard Hrishi-da fan, Akshay has been a lifelong Dharmendra fan.


So where does that leave the two leading ladies?


'Both believing that she has the best female role while Akshay has the best part by far,' said a source from the film.