If Dubai shopping festival gives away cars as bumper prizes our village melas are no less for they offer elephants, and this is what happens in SAB TV's Lapataganj.. 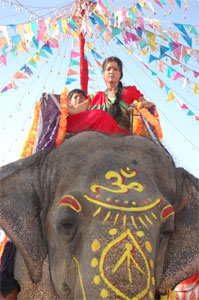 According to our source, "Mausiji, Biji, Surili, Mukundi and other residents of Lapataganj go to visit the mela. They all joyfully try their hands at various games like balloon shooting and throwing the ring. Although everyone gets a gift or two and there's no place for disappointment, the one who bags prizes at almost every game stall is none other than Indumati. As a result, she gets to take home a huge elephant as a bumper prize!"

The source further says, "The fun starts when after the initial feeling of euphoria Indumati is bogged with practicality. The trouble she has with keeping up with the animal's various needs, especially its huge appetite, opens up a whole new box of laughter."

The source goes on to narrate the off-screen incidents that happened between the cast members and the elephant. "Everyone got so attached within the five days of shooting with the elephant. They nicknamed it 'bumper'. They fed the animal all sorts of fruits that they could get their hands on."

Sucheta Khanna aka Indumati said "Me and Bumper will be seen together the maximum in this upcoming special episode. It was fun on-set with the animal around though initially I got really nervous on seeing the elephant who turned out to be very sweet and friendly."

The special episode of Lapataganj with 'bumper' the friendly elephant starts from tonight 10:00pm on SAB TV.