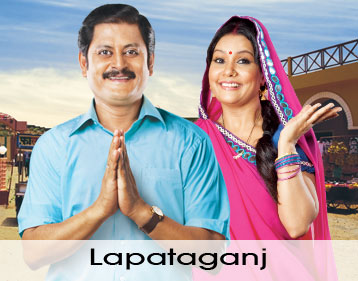 Garima Productions' popular and fun filled show Lapataganj Ek Baar Phir on SAB TV has been grabbing the eyeballs of the masses through its gripping storyline. While the viewers have always appreciated the performances of the lead actors Rohitashv Gaur and Sucheta Khanna as Mukundi Lal and Indumati but the show's comic touch is too loved by them.

As the channel is all set for its new show Tu Mere Agal Bagal Hai which goes on air from today onwards, it seems that the channel has been making few developments in its time slot to fix in the upcoming shows.

Recently there was news that the cop based show F.I.R has become bi-weekly. As fans of the show F.I.R are disappointed with the change in the time slot, there is another disheartening news for the fans of the much loved show Lapataganj Ek Baar Phir as the show is all set to go off air on 15th August.

Our sources say, "The show Lapataganj Ek Baar Phir will go off air by 15th August and a new show is expected to replace the show. However, it has not yet been decided about the new show."

6 years ago Why disappointing ?Its good. Sab tv needs new shows. All of the shows has become the same thing. One babuji with a wild family or a society with people from different social backgrounds.

+ 4
6 years ago that was a good show.. but i think there wasnt much left to it now... good that they are not unnecessarily dragging the show