Ladies Special, the daily drama that airs on Sony Entertainment Television, is introducing new set of events to make the story more nail biting. The upcoming track will have Giti who has gone with her friends to a camp at Karjat get into some major problem, which will leave her shattered. 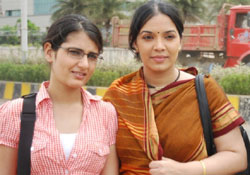 Featured Video
Shilpa Tulaskar aka Nanda Shinde tells us, "My daughter Giti falls into trouble again though this time it's no fault of hers. In spite of the humongous disaster that befalls her family, Nanda remains a strong pillar of support. She keeps her family united in difficult times and never lets Giti down. Nanda is a strong mother with abundant love for her daughter and so it's just not like her to not lend a supporting shoulder to her daughter."

Shilpa is immensely inspired by her mother and while playing Nanda,  she realizes streams of similarity between her mother and her character. Shilpa says, "Often when I portray Nanda, my mind goes back to the times my mom has supported me during my youth. So I understand that Nanda's strength comes naturally as a part of being a protective mother."

However, in real life Shilpa is yet to come across a time where she has had to display such strong emotive support towards her children. She says, "My children are very young you see. My son is six years old and my daughter is six months old. So they are yet to reach that stage where the troubles they create would seem larger than life and my supportive attitude would seem extraordinary."

Shilpa tantalizes us by mentioning the new events that are in store for Ladies Special. "Of course! Nanda and her family cannot always be the core of the story. New avenues will have to be explored in order to maintain the story's crispness. As far as my knowledge goes, the audience can definitely look forward to some phases," Shilpa signs off.

+ 5
13 years ago I love this show, its so engrossing and realistic!

+ 2
13 years ago am so looking forward to the track...but sad that such incidents happen in real life also