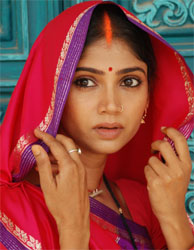 Featured Video
The present track has Laali (Ratan Rajput) fighting a lone battle with her destiny, as she finds herself on crossroads. She cannot go back to her parents after knowing that they had sold her off; also she has no place in Ganesia's heart as he is getting married to her little sister Rekha.

The coming episodes will be a turning point in the life of Laali, wherein she comes to terms with her destiny and decides on her next destination. According to our source, "She comes face to face with her friend Shanichari again in tonight's episode. Shanichari who had been sold by her parents earlier is now a sex worker, living the life of a prostitute in a brothel. All the shocking revelations ultimately lead to her taking a decision of going back to the haveli".

After her confrontation with Shanichari, the story line will focus on the manner in which she realizes that she has no other option left, but to go back to the Haveli. This will be an interesting little journey full of realizations for Laali.

The coming week will see her getting back to Loha Singh's haveli on her own. "This will bring in horrible reactions from each and everyone in the Thakur family. Shekar (Abhishek Rawat) will initially misunderstand her, and will go on to think that it is the opportunity to get big money that brings her back to the haveli".

The story line after Laali getting back to the haveli will have some very interesting turns that will explore the future of Laali. There will be certain catalysts in the story line that will initiate the next turn of events in her life..

We tired calling Ratan Rajput to know about this, but she remained unavailable for comments.

Now that Laali gets back into the life of Shekar, it will be interesting to watch how the story proceeds from here…

13 years ago Can't wait to see what happens next in the storyline with regards to Laali and shekhar.

13 years ago yeah me too sou, wow laali is returning bk to da haveli she and shekhar looks magical together i hope de fall in love soon',laali deserve to be happy after what she went thru,i dont want her to go bk to ganeshya and live in poverty

+ 4
13 years ago Would love to see Shekhar and Laali together :)

13 years ago This serial is rocking..the girl as laali(ratan) is doing a fabulous job..she is portaying the character so nicely...ultimate one... the guy as ganeshiya is also very nice..hope they come together....i thought they will show how laali will fight with all circumstances and become something...but again in haveli..laali is determined girl..if she again goes to haveli..then its really bad....

13 years ago i want her w/her ganesiya! what the heck?!

13 years ago This show definitely has some interesting twists. Now Shekar who has began to develop feelings for Laali will misunderstand her. Hmmmm. Rekha and Ganesiya didn't get married either. So he can land up at the haveli looking for Laali.