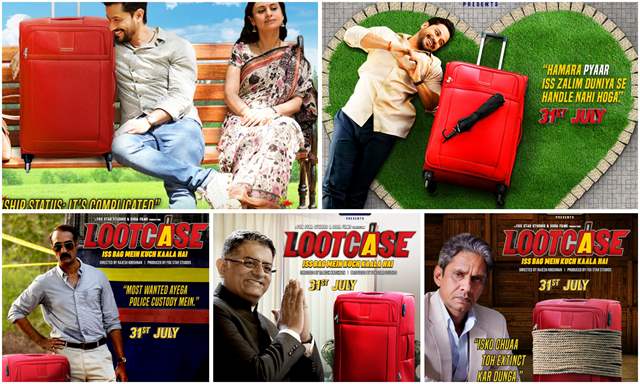 Less than a week to go for the comedy drama Lootcase to release and by the trailer and dialogue promo, the movie already looks like is going to be a rollercoaster of laughter. Ahead of its release the makers unveiled the different character posters of all the nuts in the movie.

First one being of Kunal Kemmu, where he is lying on the lush green heart shaped ground with the bag next to him and has all smiles as he is romancing with the bag.

The next one being Ranvir Sheroy, looks all serious with his avatar of the police and looks like the bag is of utter importance for him or else he might lose his job.

Gajraj Rao looks all perfect in the avatar of a politician and the money seems like his plot to the story but who knows, what’s behind the smile?

There’s another one of Kunal Kemmu with a beautiful garden in the backdrop with Rasika Dugal on one side and the bag on another amd he's more interested in the bag with money as it’s going to change his life forever.

These fun character posters have just added another layer to the excitement that’s already been seen brimming around for the film.

Lootcase will be released on Disney+ Hotstar on 31st July 2020 and the story revolves around Nandan Kumar, a middle class family man who finds a suitcase with ?10 Crores in a lonely desolate market on his way back from his night shift. However, the dark past of the suitcase catches up and what happens next? Does he fight or take the survival flight?