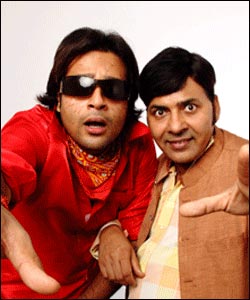 According to our source, "Winning Jodi of Sony's Dekh India Dekh, Krushna Abhishek and Sudesh Lahiri will be seen along with actress Melissa Pai in Teen Ka Tadka as Wild card entrants. Their entry will be aired this Saturday".

Melissa who will provide the much-needed 'Tadka' to the performances of Krushna and Sudesh started her career with Stree Teri Kahaani on DD. Later, she was seen in Zee's Ardhangini; she has also done cameos in Miley Jab Hum Tum and Parivaar. She was also seen in a full fledged role in Bhootwala Serial on SAB TV.

We tried calling Krushna Abhishek, but he remained unavailable.

As reported earlier, this week's episode of Teen Ka Tadka will have no elimination…

12 years ago At long last, some real laughs can be expected. Till now the participants have been dishing out absolutely PATHETIC fare, to put it most mildly. Ever since the departure of Shakil etc., Krusna and Sudesh have been the only worth while comedians on the TV screen.

12 years ago It is good to see them back especially with third person. I would love to see Sudesh Lehri interacting with someone other than Krushna. He is simply amazing!!!