Kritika Kamra owes her fame and recognition to the youth based show on Imagine, Kitani Mohabbat Hai, produced by Balaji Telefilms. And as we all know, the fabulous on screen chemistry of Kritika and Karan Kundra gradually transformed into an off screen closeness for the two, who have now proclaimed their love for each other in the open!! 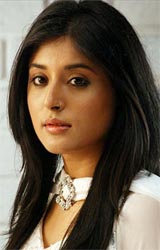 Kitani Mohabbat Hai was taken off air abruptly in September last year, and this had made the loyal fans of the show unhappy. And from then, the fans had struggled a lot to get their show back. Just a few days back, TellyBuzz gave the readers good news of the possibility of the sequel of Kitani happening. However, Kritika is today livid at a particular report that is written on an online portal.

She clarifies that the online portal has misquoted her, and apologizes to the fans who have taken her so-called quotes in bad light.

Kritika tells TellyBuzz, "See, I know the pulse of the loyal audience of Kitani Mohabbat Hai. I very well knew that they were very upset when our show went off air. They were fighting hard to get their favorite show back, and today they are in some way successful, as there is a strong buzz of the show happening again. It's quite flattering for me to see my show come back. So why wouldn't I be a part of it?".

Talking further, she says, "I am very much upset about a particular story coming up on a site. I have been misquoted there. I have never claimed that I would not be part of the sequel, or that the show did not appeal to a particular set of audience. On the other hand, I will be privileged to be part of the sequel, if it is happening. I have been getting so many calls from the time that particular story has gone out. I apologize to my fans who felt that I have made them unhappy. Like them, I too wish that the sequel does happen, and the Arjun - Arohi jodi comes to life again!!".

Well, like Kritika, we too hope that the sequel does happen and things fall in place, both for the actors as well as the loyal fans...

anitaksuresh 9 years ago Waiting to watch u Kritika soon onscreen in KMH2.

naanii.1389 10 years ago luvd u as arohi!!!!! awessum acting ssplly ur comic timing ws superb, though v hadnt got 2 c so much of dt!!! and ssplly lluvd arjun-arohi pair!!!!! m so happy dis is happnin:-) i ws cmpltly devastated wen it ended abruptly!!

.ramya-gurtian. 10 years ago i am from andhra pradesh my first hindi serial was kitini mohobbat hai now a days vim watching many shows in hindi but none of them is so close to me other than kmh im so excited to watch arjun aka karan and aarohi aka kritika together again

Deepika Padukone Arrives at NCB, to be Questioned over ...
4 minutes ago