Kritika Kamra who was last seen with her beau in Star Plus' Zara Nachke Dikha is back to fiction!! But wait, it is not for Kitani Mohabbat Hai on Imagine, but for Ganga Ki Dheej on Sahara One!! 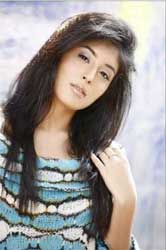 We hear that Kritika will play an important cameo role lasting for one or two episodes in Ganga Ki Dheej, which is being jointly produced by Harry Baweja and Shabbir Ahluwalia.

When contacted, Kritika confirmed the news and said, "Yes, I am playing a cameo, and will be seen in the first episode. In fact, the Director who was with us in Kitani Mohabbat Hai is directing this show. So when I got a call from him, I immediately accepted to be part of it".

The story revolves around a particular custom in a village wherein a girl on attaining puberty has to undergo a purity test. Kritika will be seen playing the character of Geeta, a girl in the village who has to go thro' this testing ordeal.

Talking about the much-awaited sequel of Kitani Mohabbat Hai, Kritika quips, "We are planning to start shoot in the first week of September. I would like to clear one thing here. One cannot call this as a Sequel, as the entire story line is different. You can say that we are coming up with Season 2 of Kitani. It will be a fresh new love story, is all I can say at the moment".

Kritika did not shy away from talking about her on screen and off screen hero, Karan Kundra. "Karan is not in India at the moment. He has gone to meet his mom in USA. He wanted complete family time before he gets into the hectic schedule of Kitani", she quips.

We wish Karan and Kritika all the very best for their next major project..

Pranii 10 years ago only 3 days left to see u onscreen again Yay!

Anjali96 10 years ago omg kmh2 promo...me soo happy and u luk beautiful in ur pics Kitloo