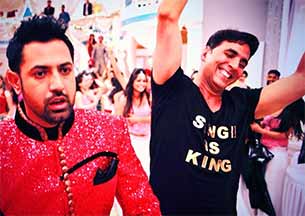 The international distribution rights of Viacom 18 Motion Pictures Punjabi comedy "Bhaji In Problem" have been acquired by Krian Media Ink International. It will release the movie across 150 screens Friday.

This is the third such deal between both parties - the past projects being "Boss" and "G.I. Joe Retaliation".

"Bhaji In Problem" will have a day and date release in most international markets.

"With respect to 'Bhaji In Problem', we support the movie completely as it is a great product and we really believe in it," Raj Malik, vice president (film acquisition and distribution), Krian Media, said in a statement.

"Our association with Viacom 18 Motion Pictures is a very important one for us as it is not just an important client relationship but also optimally validates our achievements and growing market position," he added.

exclusive
Exclusive Ashnoor Kaur on music video with Millind: It is something ...
7 minutes ago

Anurag Kashyap to soon record his statement, after Payal ...
46 minutes ago

Breaking
Breaking Namish Taneja back on ‘Aye Mere Humsafar’ sets after ...
2 hours ago

No Escape Plan for Rakul; To Appear for Questioning before ...
2 hours ago
View More
TOP