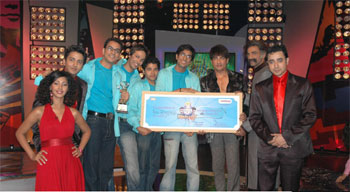 Featured Video
Speaking on the occasion, Shekhar Suman, judge for the Comedy Gang War said, "The Kool Kolkatans truly deserve their win, though for us, all three finalists are winners. All these kids are fresh talent entering the industry. The team has performed consistently and has made us proud. We wish them all luck for their future and their film assignment."

Commenting on their achievement, the elated comedy gang winners said, "At first we were shocked to hear Shekhar Sumanji announce on the set that we had not won the competition. However, later on, we learnt that we had won & that he had played a prank on us. We thank Bindass and the entire production team for giving us the opportunity to showcase our talent on national television and we are eagerly looking forward to presenting our best comic act on film…so Bollywood here we come!"

The comedy gang of Kool Kolkatans includes Kapil Madnani a 23 year old professional DJ and second runner up of Mr. University - Kolkata who graduated last year in Commerce and is currently pursing his career in film and sound editing; Vineet a funky DJ and professional film editor who loves to see others laugh; Nitin Bararia a dedicated theatre artist who has won several awards as best actor and as a pre-eminent stand up comedian and; Abid, an independent lad with a dream to make it big in the film industry.

Judged by the Bindass duo, noted television personality Shekhar Suman and actor, director, theatre personality Makrand Despande, the show received enormous response from viewers and fans across the country. The entire series saw two rounds; Shoot at Site and Jaldi Jugaad being contested in each episode. While Shoot at Site was a pre-recorded gag, Jaldi Jugaad was an on-the-spot performance and had different themes for every episode. In addition, the finale episode saw the gangs presenting a fun-filled and hilarious dance performance on select Bollywood chart busters. Laced with mind boggling performances by the gangs, the finale was one of the most entertaining episodes to be remembered by all.

The journey is not over for the Kool Kolkatans…it has in fact just begun.