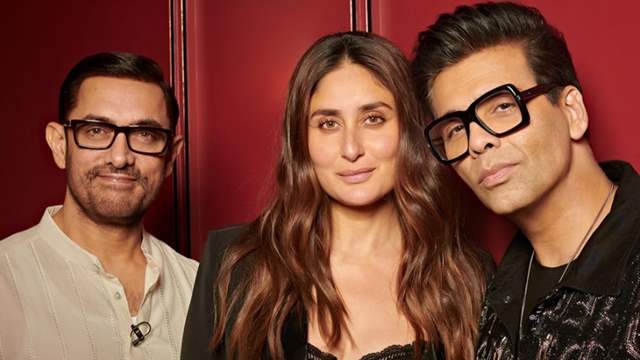 Several reports were doing the rounds about how Laal Singh Chaddha duo, Aamir Khan and Kareena Kapoor Khan will appearing on Koffee with Karan season 7. The two were not seen in the trailer of the chat show but it was speculated until some BTS pictures went viral on the Internet.

Well, now Karan took to his social media account and shared the promo of the 5th episode of the season starring the Laal Singh Chaddha duo.

Taking to his Instagram account Kjo shared the promo which is all times juicy. The filmmaker wrote,

"A duo you Khan-not miss!😉 On the Koffee couch this episode, are two epic Khans and it cannot get more savage than this!"

In the promo, Karan asks Kareena about her sex life saying, "Quality sex after babies myth or reality" to which Kareena says, "You wouldn't know". Kjo then adds saying, "My mother is watching this show, and you are talking badly about my sex life." While Aamir says, "Your mother doesn't mind you talking about other people's sex life."

The actors can be seen quizzed with hilarious questions ahead. In the end, Kareena says to Karan, "And you thought Aamir Khan would be boring."

Well, the promo has already hyped us all for the 5th episode and we can't keep calm until Thursday.

This would be the first time that Kareena Kapoor and Aamir Khan will be promoting Laal Singh Chaddha together. The film, an official Hindi adaptation of the 1994 Hollywood feature Forrest Gump starring Tom Hanks, is slated to hit theatres on August 11.

Kareena and Aamir's Laal Singh Chaddha is all set to release on August 11, around the festival of Raksha Bandhan. It is directed by Aanand L Rai. It will clash in theatres with Akshay Kumar's Raksha Bandhan.

+ 3
1 months ago Kangana was right about him.. in this show all he talks is nonsense & peoples pvt life… y they don’t ban this show… & he class himself classy 🙄🙄🙄… in which way he is… he is the most lowly person who I saw in Bollywood… there r other directors too… y they never come for publicity… y only this Karan is given so much importance 👎👎👎