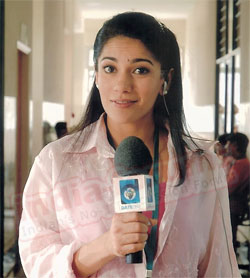 Sting operations are here to stay, and now there are movies made on them. Koel Purie plays a television reporter in the maiden venture of Anima Films, 'It's Breaking News'. Koel's role as Vidya sees her sucked into the corrupt and unethical ways of the business of journalism. She enjoys it, in fact, till she gets herself into a situation where she has to fight the very system that made her.