Director and producer Aditya Chopra and Karan Johar are very close friends. These days both of them are busy with their next flicks. On one hand KJo’s  is making ‘My Name is Khan’ while Aditya Chopra is making ‘New York’. Both the films are based on terrorism.

‘My Name is Khan’ is based on the bad condition of Muslims community after the September 11 terror attack. It will also focus on the creeping insecurity and feeling of being left out among Muslims in India.The movie stars Bollywood’s best onscreen pair Shahrukh Khan and Kajol in lead roles. 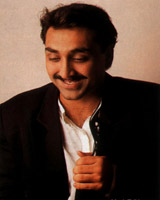 On the other hand ‘New York’ is a story about three friends discovering new world with an interesting star-cast starring John Abraham, Katrina Kaif and Neil Mukesh.  And one day things around them change completely and they realize that it’s their religion that kept them together. Irrfan Khan is also a part of it who plays a crime investigating officer.

Surprisingly, both the films are based on similar subject and are being shot at the same place Philadelphia. We can just say that both Aditya and Karan have started similar taste in film making along with good friendship.