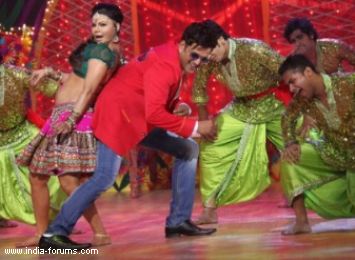 "Bhojpuri songs are played every week on the show. Karan Johar had told me he wants me to dance on a Bhojpuri song every week. I am happy that Bhojpuri is doing so well," the 40-year-old said here Friday at the premiere of his Bhojpuri film "Jwalamukhi."

Actress Madhuri Dixit and choreographer Remo D'Souza are the other two judges on the show.

"I want to wish Shah Rukh, he has done tremendous job in 20 years. I have been a part of most of his films, right from 'Baazigar' to 'Main Hoon Na.' Both of us have seen ups and downs. I am appreciating him, hope he also appreciates me," the 51-year-old said here Friday at Esha Deol's wedding.

Besides "Baazigar" and "Main Hoon Na", the music of Shah Rukh's "Asoka", "Josh", "Baadshah" have been composed by Malik.

Neetu in awe of her Greek film look

Actress Neetu Chandra, who has finished shooting for "Home Sweet Home", a Greek-English film, reveals that she has been shot in a very "Yash Raj" look in the film.

"I have just finished a Greek-English film where I play an Indian girl. I did it because it has me in a totally Yash Raj look, salwar-kameez, sari and the kind of looks in 'Kuch Kuch Hota Hai' and 'Dilwale Dulhania Le Jayenge'," Neetu said.

"Indian films are famous because of their Indianness, our attire and all. I am happy that the Greeks admire us, our impression on them is very good," she added.

Deepika Padukone Arrives at NCB, to be Questioned over ...
44 minutes ago