Rakesh Roshan, the producer of the upcoming movie, "Kites" states that his movie has been made for "the global audience of all age groups". The movie is a love story, spanning romance beyond boundaries. Bollywood's blue eyed, dancing divus Hrithik Roshan stars as a Salsa teacher. His love interest is played by Barbara Mori, the new import from to Bollywood and our very own curly queen, Kangana Ranaut."Kites" was screened in the recently concluded Cannes Film Festival and is slated to release in on October 16th, this year. 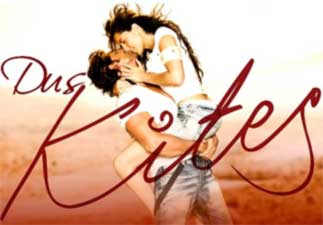 The movie is said to be a modern love story, made for a global audience, and has global appealing concept and look. Rakesh Roshan highlights that the film shows "love" as "a universal language; it crosses all boundaries and is not bound by any constraints". Since, the sensuality and kissing scenes in the movie are creating a buzz for some time now, FilmKraft owner says it's not meant to be for a "specific audience" and is "as per the demand of the situations in the film".

So, if the movie is for all age groups, then, what happens to the children who go to see such a movie? Isn't Hrithik Roshan, most children's favorite actor? Specially the ones made by Papa Roshan. Who can forget Koi Mil Gaya and Krish?

We think kids would be eager to watch Krish-2, what say Roshan Saab??