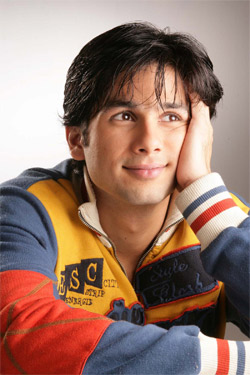 He had a nationwide shocking break up with Kareena but he didn't utter a word, he was paired with Amrita Rao still he stood numb but now even though his pairing with Vidya was much on speculation, this time the chocolate boy Shahid Kapoor could not bear this and has opened his mouth for the first time. Too hot to resist!

The romance between Shahid and Vidya blossomed on the sets of Kismat Konnection (maybe the film was, tough unintentionally, named to suggest both reel and real life star connection). But see the kismet! Shahid is not ready to accept the fact behind the fiction. He says that both of them are just good friends! Well, we may consider the friendship as the fist step towards love. But Shahid has problem with that also. "I am single now so everyone will link me with anyone," Shahid gets little indignant.

People have been talking about his and Vidya's love connection from the very beginning of the schedule of this film. They both spent 15 days together in Toronto on the shoot and came close to one another as because they had no other choice. Think again. Firstly, the break up between Kareena and Shahid, then followed the Amrita episode which also flopped miserably and see, now Shahid is with cool Kerala beau Vidya. That’s how kismet draws people to their connections. Shahid, are you still looking for more clues? -Sabir Rahman
Featured Video