Maybe there is on one in this world who doesn’t believe in kismet but for that single reason you can’t blame or over emphasize the issue of kismet. But the story of the film depicts little more. 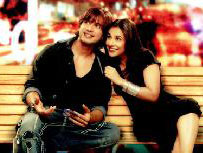 Just like any other Bollywod flick, in this film also, Raj (Shahi Kapoor) and Priya (Vidya Balan) meet each other. But despite feeling love for each other the only thing they develop for each other is pure hatred. But see the kismet connection hidden in such a chemistry which turns bad luck of Raj, who has been fighting for getting a better work for last five years in the field of Architecture, into a good one. Raj comes to his fortune teller Hassena Banu Jaan (Juhi Chawla) and describes everything to her. Banu tells him that Priya is his lucky charm and for a better future he should always take her with him to wherever he goes for his job. Raj agrees on it and takes Priya to a meeting with Batra & Gill, a company that wants to construct a shopping mall. But soon Raj comes to know that the proposed mall is going to be made by demolishing Priya’s community centre. Priya helps Raj without having any idea about what’s going on. But as soon as Raj gets the project, the reality comes into open for Priya. For the sake of love Raj proposes Gill (Om Puri) for building the combination of shopping mall and community center but Gill denies it. At the end of the story Priya’s kismet helps Raj once again and Mr. Batra (Boman Irani), friend to Priya and partner of Batra & Gill, accepts Raj’s proposal of making the shopping mall beside the community centre.

Shahid must remember that audience’s expectation regarding his characters in films has touched the sky after the success of Jab We Met and he must accept films keeping that in mind only. At the same time he must avoid playing the stereotype characters. On the other hand Vidya has tried her best to live the life of her character but unfortunately the character, especially her outfits, hasn’t suit her level best. I guess she must not attempt this kind of characters. Juhi Chawla is excellent in the character of Hassena Bano but the lose bangle in her hand made audience think about possibilities that forced her wearing it. Few scenes with Vidya made us realize like Juhi’s jewelries are put on Vidya. Om Puri and Boman Irani are good as usual. Himani Shivpuri proved with two scenes that character maybe small but it has to be strong. There is nothing to talk about other characters of the film. Despite its length of 2 and half an hour, the film seemed longer and unusually slow. Aziz Mirza has chosen beautiful locations but he better has understood that beautiful locations cannot make beautiful films. Music and lyrics are not to the marks.

Expectations of watching a good film may drag a lot of audiences to the theatre but they better know in advance that the film has nothing extraordinary to offer the audience. People will surely fail to connect to the film, if not to the stars.