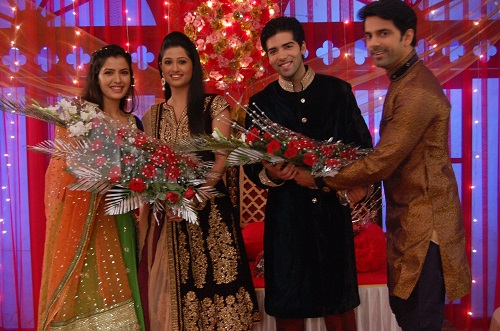 It's a happy moment to be witnessed in Rajan Shahi's popular show Itti Si Khushi on Sony TV as Neha and Aman are getting engaged to each other amidst celebrations and gatherings. The duo will be inviting a special guests at their engagement ceremony who will come there to wish Neha and Aman.
We heard from our source that, "As Neha (Smriti Kalra) and Aman (Anuj Sachdeva) are getting engaged in the show, Kinshuk Mahajan and Shefali Sharma who will be seen in Sony TV's upcoming show Tum Aise Hin Rehna will be seen making a friendly appearance in the engagement ceremony of Neha and Aman in Itti Si Khushi. They will come there to wish and to congratulate Neha and Aman for their engagement. Riya is Neha's childhood friend who has come with her fiance Abhimanyu. They will be meeting Neha for the first time since she has come back from coma. Neha is very happy to see her childhood friend."
We spoke to Kinshuk to know more about his sequence in the show. Telling us about his experience, he told us, "It's an integration sequence where Neha and Aman are getting engaged; Riya and I go there to wish both of them all the best for their future. It was basically promotion for our show where the story projects about husbands' change in behavior after getting married and in the end girls agree that husband do change after marriage. My show is how about how husband's behavior is changed after marriage and that is because of girl's perception. Wife wants her husband wants to be same even after marriage and mother wants her son to be same its all about that."
"I did Sapna Babul Ka Bidaai produced by Rajan Shahi and the did Chand Chupa Badal Mein where the production house was like a home to me. I used to feel it's my second my home. It was very nice working with the people whom you know I never felt uncomfortable. It's a very nice feeling when people treat you like a family member. Rajan Shahi is one the best producer in the industry. I worked with him in Bidaai and he is a very nice human being to work with. It was really nice experience shooting with Anuj and Smriti I know Anuj for a long time as we both are from Delhi. I met Smriti and she is brilliant actor. She is doing very well," adds Kinshuk.
Talking about the sequence, producer Rajan Shahi told us, "It was nice feeling when Kinshuk said that while shooting he is feeling at home on Itti Si Khushi set. He has been my prodigy and has worked in Bidaai along with Sara Khan, Parul Chauhan and Angad Hasija and he has also worked in Chaand Chupa Badal Mein. He is doing well in career. I wish Kinshuk all the best for his show."
Keep reading this space for more updates.
Anwesha Kamal
12 Likes

snowhitepinkzz 6 years ago When its about Kinny, its about Bidaai for me!!, Cannot still get over the RagVir/SaAlekh addiction . . .Its a delight to see these names together!!
KINSHUK MAHAJAN, PARUL CHAUHAN, SARA KHAN, ANGAD HASIJA!!. . . .

FOURSOME you are cherished and loved a lot!!

All the best Kinny!

moniluvskinshuk 6 years ago KINSHUK MAHAJAN I want ur character of Abhimanyu to be different from ur all other characters which U played till now & I don't want Abhimanyu to be Mom blinded lover . I hope He will not be like that . Apart from that I am to excited for the show 2 start ..All the Best Dear!!

trinilisa 6 years ago All these guest appearance KINSHUK, can't wait to get you back full time ...

Smriti is so cute ..

anjumluvkinny 6 years ago I want to thanks Rajan sir for bringing Kinshuk Mahajan.

anjumluvkinny 6 years ago KINSHUK MAHAJAN wishing u best of luck for your new venture,eagerly waiting for your show.

kmfan_2 6 years ago Kinshuk Mahajan... You are looking very handsome in this picture and I can't wait to see you in this show!

moniluvskinshuk 6 years ago Waiting for the episode to air and to see my Hottiee Kinshuk Mahajan on TV &lt;3 &lt;3

trinilisa 6 years ago Wishing everyone success with their respective shows and so nice to get news and article on KINSHUK MAHAJAN ...

It would be nice to see Kinshuk and Parul together at a function and fans could get some pics of their KinRul !!!

anjumluvkinny 6 years ago Kinshuk Mahajan i really love u alot,cant wait for your show n i want to thnx Rajan sir for giving such a lovely jodi of Ragvir n Nivren but i want confess Ragvir is most favourite jodi n Nivren is most loveable jodi of mine but Nivren is number one for me.