Believe it or not, toeing the lines of Hrithik Roshan, now it is Shah Rukh Khan who is all set to do an item song in ‘Krazzy 4’. And what is more interesting is that director Rakesh Roshan has approached King Khan to make a special appearance in the film which is believed to have four item songs in all – and one of these is to star Hrithik and SRK together!

A highly placed source in Bollywood reveals that Rakesh and son Hrithik were keen to have SRK for the item song as they believed it would enhance the prospects of the project. And when Rajesh approached King Khan with the offer, the latter readily agreed to it as he does not have any project on the floors now.

After all, the Roshans too had done special appearances in Shah Rukh’s ambitious and now h 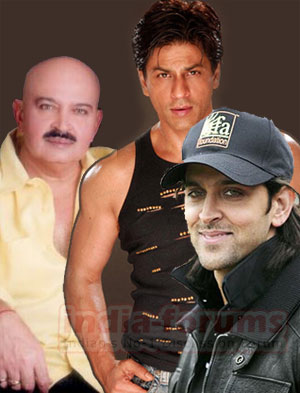 Featured Video
it project ‘Om Shanti Om’ and this is believed to be a reciprocal act on the part of Shah Rukh Khan. It has been agreed that they will shoot the song soon after Hrithik returns from Singapore and Australia where he is resting his injured knee.

Interestingly, the Roshans are being too secretive about the project and refuse to divulge much either about ‘Krazzy 4’ or the item song. All that Rakesh Roshan has to say is, “Well, things are not yet confirmed, but yes, maybe you will see Shah Rukh Khan in Krazzy 4’. However, a visit to the sets revealed that the song will be shot on a majestic set that is under construction right now and the Roshans are leaving no stone unturned to make it a big hit. A lot of money too is being poured in to shoot the song.

Meanwhile, ‘Krazzy 4’, said to be an out-and-out comedy flick’ also stars Arshad Warsi, Irrfan Khan, Juhi Chawla and Rajpal Yadav. And mother of all surprises, oomph girl Rakhi Sawant has also done an item number in the film. According to grapevine, initially, the Roshans had approached sultry Shilpa Shetty for the item number but the actress who is on a high trip after ‘Celebrity Big Brother’ is learnt to have asked a whopping Rs 50 lakh for doing the favor and was dropped like a hot potato.

Recently I had gone to cover the Rs 1.5 crore funded ‘Jyotirling Festival’ organized by Ashutosh Rana and Rajpal Yadav on the grounds of Thakur College. Although I was there on Rajpal Yadav’s invitation, I was literally pissed off as it took me three hours to reach the place. The ordeal continued as I had to wait endlessly for a byte. However, Rajpal was understanding and kept on apologizing for the delay.

While I was standing along with the head priest of the function, I suddenly noticed Rakesh Roshan coming along with Rajpal Yadav towards the ashram. Soon all the scribes were asked to leave the place, but I somehow managed to linger on along with the photographers.

Soon I heard Rakesh Roshan telling the head priest, "I am making a movie called ‘Krazzy 4’ so please let me know how well that movie will do. I am really working hard on this movie". In return, the priest showered his blessings on Rakesh assuring that the movie would be a super duper hit. Surprisingly, the priest seemed to be ignorant about Rakesh’s fame and popularity. Soon after Roshan senior left the place the priest said that Roshan had a very bright future and would be a pioneer in his field.

Now the moot question is, is Roshan senior not too confident about the success of his new project? Or else, why should he need to approach Shah Rukh Khan for an item song despite having home-grown Hrithik Roshan along with the controversial item girl Rakhi Sawant to make his movie a big hit. Need more masala, Mr Roshan?