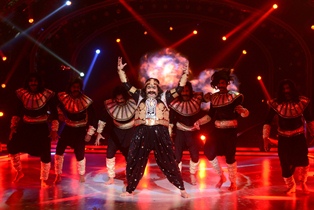 As the competition is getting stronger by the day in Colors' popular dance reality show Jhalak Dikhlaa Jaa Season 7, each contestant out there is trying hard to give their best performance and win the trophy.

With the level of the competition going a notch higher, funny man Kiku Sharda will be seen performing Tandav in the upcoming episode. Kiku and his choreographer Kruti will dance on the song from the film Ranjhana and will depict the war between Ram and Ravaan.

While the viewers have seen Kiku performing on Bollywood songs but this time he will perform a Tandav for the very first time using the background dancer which was a challenge for this episode.

Our source says, "For the first time comedian Kiku has attempted Tandav and he excelled in his performance. His performance fetched him good comments and the choreography was applauded by the judges."

The source continues, "Remo Dsouza was really proud of his performance and also complimented Kiku saying that it was a visually strong performance."

We wish Kiku all the best!