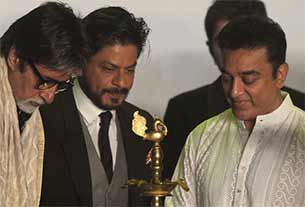 Describing the eastern metropolis as the "pioneer" of film festivals, actor-filmmaker Kamal Haasan Sunday dubbed the 19th Kolkata International Film Festival (KIFF) as an "apex" movie gala of the country.

The southern star arrived in the city late Saturday night to participate in the inaugural ceremony of the KIFF here Sunday.

"It (Kolkata) has not only been a place of great film artists, but also film societies, so I have come to the capital of film societies and film festivals," said Haasan.

The actor said he wanted to work with stalwarts of Bengali cinemas Satyajit Ray and Mrinal Sen.

"It will happen sometime if I am lucky...if nobody offers me, I will produce one."

The KIFF, scheduled to be inaugurated by Bollywood megastar Amitabh Bachchan, would be graced by a number of luminaries, including superstar Shah Rukh Khan, who is also the state's brand ambassador.

The eight-day-long carnival, featuring 189 films from 63 countries is likely to be an enriching experience for cinema connoisseurs.

The KIFF's latest edition has gone digital through a mobile application providing detailed information about the screenings across 13 venues in the city.

Around 3,000 delegates and 24 international guests, among them noted Israel filmmaker Amos Gitai, will attend the film festival.