View Profile
Khayali, who succeeded in giving us the best medicine of life i.e. laughter via Star One’s Laugher Challenge, is now ready to bring more smiles on our faces. The stand up comedian turned actor, Khayali, has already got four films in his kitty. The happy go lucky comedian manages few moments out of his hectic schedule to share his thought about his upcoming film One Fine Monday where he would be sharing the screen space with his laughter challenge judge Shekhar Suman.

Q. What’s so fine about your debut film One Fine Monday?
A. The finest thing about my debut film is that I am a Tapori in this film. I was always fascinated to roadside taporis, so when I got this offer I just felt extremely happy and grateful, too, that I have got such a good role to start with. 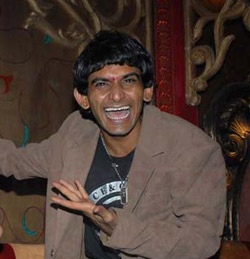 Q. How is your character in the film?
A. Actually this film is related to bhai giri, where I am playing the role of circuit whose day starts and ends with his bhai. He is just like the shadow of bhai like the way circuit was in Munnabhai.

Q. How close is this character to your real self?
A. It does not match with my real self at all. Because it has hardly been few months that I am in Mumbai and I have hardly interacted with any of taporis. The only thing I know is that it’s very difficult to act like a tapori and I am giving my hundred percent to do justice to this character.

Q. Should we expect to hear ambiguous dialogues which were your tour de force in Laughter Challenge?
A. No, not any kind of double meaning language is used in the film. It’s a good film which can be seen by a family.

Q. How was it working with your judge turned co-actor Shekhar Suman?
A. It was good because when we were in laughter challenge, he advised and suggested a lot. And here also he taught me lot about how to act in front of camera etc. So, you can understand how good an experience it was working with him.

Q. Where do you see yourself five years from now?
A. See, there were three laughter challenge shows where 150 artists were present. And among them I am the only person who has got four films at a time and that’s also with good roles. So, you can guess where I will be after five years.

Q. What advice would you like to give to the youngsters who want to plan their career in stand-up comedy?
A. Actually, I am new in this field and still I am learning from others. So, I am not eligible to advice anyone. Only one thing I will say that whatever you are doing, do it honestly and dedicate yourself to work only. It’s only then you can succeed.

Q. Any other projects you are working on?
A. Besides this movie, I am working in other three movies namely Singh Is King, Meri Padosan and The Party.