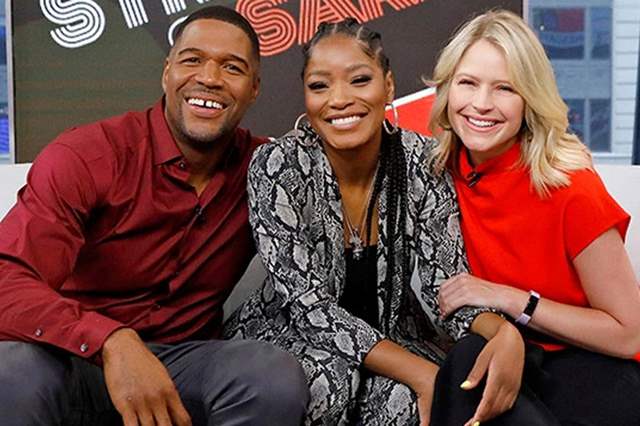 Actor Keke Palmer is, once and for all, addressing the rumors of Strahan, Sara, and Keke being cancelled. It has been four months since the talk show—which stars Palmer, Michael Strahan and Sara Haines—was suspended and replaced with a news program about the global coronavirus pandemic. Earlier this month, reports spread that Strahan, Sara and Keke was canceled and that GMA 3: What You Need to Know was airing in its place.

Some fans wondered if there was a connection between the move and Palmer's recent comments about racial injustice in America. The 26-year-old actress has been speaking out on social media, and a video of the star asking the National Guard to join a peaceful demonstration went viral last month.

But on Monday, Palmer set the record straight about the show. She wrote a message alongside a post that read, "Ain't it weird how Keke Palmer was seen protesting and preaching to the police about racism in our country then ABC decides to cancel her show."

"I want to speak on this simply because I hate the narrative that if you speak your mind as a Black person that you will in some way be punished," Palmer wrote in the caption. "I have seen this going around and at first I ignored, but in this climate I realized this is a dangerous message to send to our generation and the generation coming up. If anything, my speaking out showed the corporations I work with how important my voice is and anyone that has a POV."

Palmer then claimed "the reality is" she "never signed to SSK as one would a seasonal show."

"This business is dynamic and instead of thinking of me as a 'series regular,' see me... as a brand that works with the corporation Disney/ABC News and this particular show I was on is no longer," she continued. "That does not mean the relationship I have with them dies, that means it evolves."

The TV star wrote she hates "talking about business because it can seem a bit weird and gets quite technical lol."

"But when I see such fear mongering comments I want to speak out so that no one ever feels or thinks that speaking out will cost them their job!" she added. "I'm sure it can and has before, but let's also recognize when it has not. That way more of us with our own minds speak out against any injustices we see. Trust me, walking in my truth has always made my blessings OVERFLOW and connect to those that are like minded and not with those that are not. Do not believe this lie. Stay courageous and stay true because GOD HAS YOU ALWAYS."

Keke Palmer Responds To August Alsina Slamming Her On Twitter

exclusive
Exclusive Daya Shanker Pandey on What Excites Him Even After Two ...
13 hours ago