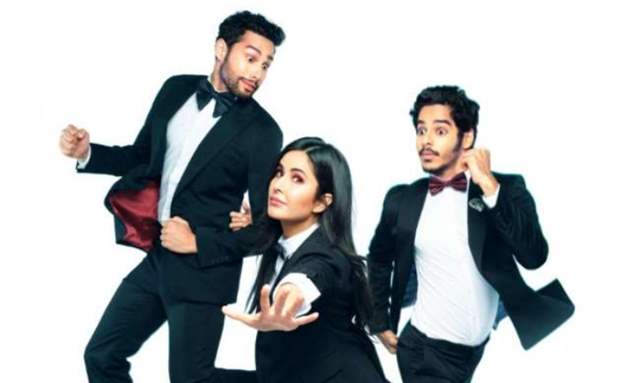 Katrina Kaif, Siddhant Chaturvedi and Ishaan Khatter are making it to the headlines for their upcoming film ‘Phone Bhoot’. The trio will be collaborating for the first time and the film is touted to be known as Desi Ghostbusters. During the official announcement of the project, the makers of Phone Bhoot shared a poster featuring the trio, in which they were seen all suited up in tuxedos.

A recent report in Mid-Day has informed about the recent developments about the upcoming film and suggested that the shooting of Phone Bhoot will go on floors by November end.

A source revealed, "While Siddhant has been shooting for Shakun Batra's yet-untitled next in Goa, the remaining cast of Phone Bhoot joined him in the beach state for an elaborate reading session last month. After the initial prep, Katrina headed to the UK to meet her family. Happy with the way the readings panned out, Gurmmeet informed his team that he is ready to roll with the project soon."

The report also mentioned that a chunk of the film, which revolves around three ghostbusters, will be shot in Goa followed by a Mumbai schedule.

Considering the current Coronavirus situation, the makers have ensured the safety of the entire cast and crew. They have to called-in the safety protocols which were issued by the authorities.

Speaking to Mid-Day, the filmmaker spoke about the same and said, “I am thrilled to start the project. For the moment, I am taking baby steps. Things have been [uncertain] because of the pandemic, but we will get clarity soon."

On the work front, Katrina will also be seen in Rohit Shetty’s ‘Sooryavanshi’ co-starring Akshay Kumar in the lead role and also has Ali Abbas Zafar’s superhero series in the pipeline.

On the other hand, Siddhant will be seen in Shakun Batra’s untitled next where he will be sharing screen space with Ananya Panday and Deepika Padukone.