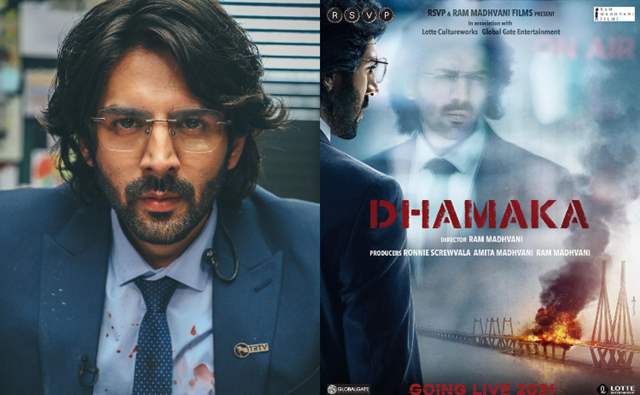 To note, The much-awaited film set a record after the director wrapped up shooting for the film in just 10 days. The makers including Madhvani and Ronnie Screwvala had reportedly booked an entire hotel in Powai where major portions of the movie were shot.

Now, a major development about the film has made it to the headlines for the film which is in the post-production stage.

A source informed that Kartik’s Dhamaka has been sold to Netflix for a whopping 85 crore, reported Pinkvilla.

“Dhamaka is one of the most awaited films of Kartik Aaryan in 2021 and the makers are looking forward to unveiling it as soon as possible. As of now the tentative release date for Dhamaka is said to be June. Final paperwork between the production house and the OTT giant is expected to be done in a few days,” added the source.

Previously, Kartik had even shared the picture of his new avatar as he will be seen playing a journalist in the film and has his hair grow long for the character. Donning a suave suit and spectacles, the actor is all set to deliver a never seen before avatar in this suspense thriller. He has a bearded look, with a thick stubble, moustache and hair too long. To notice, blood stains can be seen on his shirt which is quite intriguing.

Apart from Kartik Aaryan, Dhamaka also features Mrunal Thakur in the lead role and the actor had released the poster of his film on his birthday, November 22.