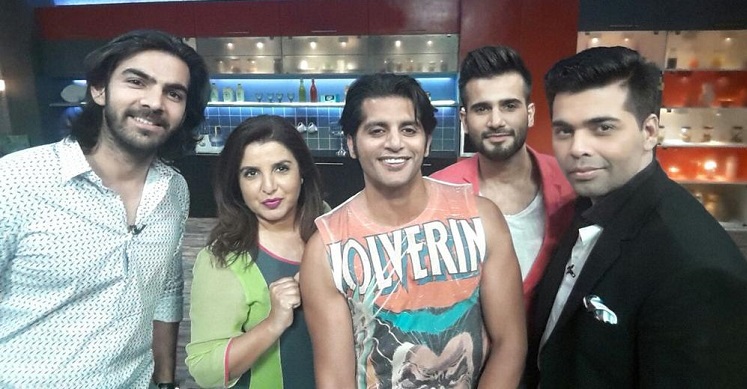 Celebrity cooking show on one of the leading GECs is witnessed by the viewers for the first time on the Indian television. Post Bigg Boss - Halla Bol series, viewers have surely accepted Farah Khan as a host. One of the unique culinary shows which invites Bollywood and TV celebs, leaves no stone unturned to entertain the masses.


TellyBuzz has quite a few times updated you guys with who the next celebrity is on this cooking show.

We had earlier seen Abhishek Bachchan opposite Sargun Mehta, six of the Bigg Boss season 8 contestants.

Well, soon over the weekend, four famous Karans of the industry - Karan Tacker, Karan V Grover, Karanvir Bohra and Karan Johar will be seen on the show.

When contacted, Karan Tacker said, "It was a fantastic experience. We had a lot of fun and did crazy stuffs. Farah is an amazing host. In fact, we had eaten sweets before starting with the shoot."

Karan Tacker is a good chef and when asked, he says, "I cook occasionally but when I do, I nail it."

To sum up, it is Karan vs Karan in the show.

Besides them, Sania Mirza, Yuvraj Singh, Rashmi Desai and Nandish Sandhu too will be seen on the show.

The coming weekend is for sure going to be one wait and watch one!

6 years ago Karan v grover love u so much.
Love dis show.

+ 3
6 years ago Karanvir Bohra
You rock as Aahil Raza Ibrahim.ILU

+ 2
6 years ago sargun mehta was really gud in the episode.shes fab actress alao.

6 years ago I will be watching this episode just for Karan V Grover as i really miss watching him on tv.

6 years ago That's not enough Karans lol, there are so many missing :D