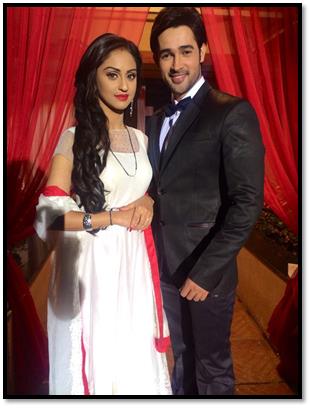 Sony TV's popular show Ek Nayi Pehchaan produced by Jay and Kinnari Mehta are known to bring in new twists in the tale to keep the audience hooked to the show.

TellyBuzz had earlier reported about all the drama that took place in the show. And yet again we have got something quite interesting for the viewers on the platter. Read on!

Our source informs us, "There will come a sequence in the show where Sakshi (Krystle Dsouza) will feel she is pregnant but has to yet confirm about her pregnancy from the doctor. Shanaya (Nazea Sayed) overhears the conversation of Karan (Karan Sharma) and Sakshi regarding the latter's pregnancy. Listening to this Shanaya plans to push Sakshi off the stairs so that she can never become a mother."

"Karan will see the entire planning and plotting and as to how Shanaya wants to harm his wife. Seeing all this, he will get extremely furious and will lock Shanaya in the store room. Amid all of this Shanaya gets hurt and she will start bleeding because of which she will be taken to the hospital," adds our source.

"Aarav (Alam Khan) will also be seen over reacting to the situation and he will blame Karan that he purposely tried to harm his sister. Since the injury is too complex, police will arrive and they will ask questioning everyone regarding who is behind all this. Next what happens is Aarav will pressurize Sharda (Poonam Dhillon) to tell the truth to the police and because of all the pressure she will confess that Karan is behind the entire game plan. Sakshi will try to make Sharda understand that Karan has nothing to do with Shanaya's injury, but all on deaf ears," concludes our source.

Well, looks like Sharda is bound with Pallavi's (Padmini Kolhapure) promise and this will bring new trouble for her kids. This will surely be a good watch for the viewers.

+ 2
6 years ago I am done with this show. I liked this show at the beginning, but its too much now.

6 years ago I'm just losing all my patience with this track now.. The Shanaya track is the most irritating track ever in ENP.. She's just too evil to even think of doing such thing to anyone.. How can someone be so blind with revenge that they want to ruin someone's pregnancy.. Poor KaSak..

6 years ago Oh no poor KaSak.I hope after this major drama, Shanaya track ends but we will get to see some emotional KaSak scenes.

+ 2
6 years ago about time Shanaya sent to Jail. what she wants to do to sakshi is a crime also

6 years ago Okay it's high time that Shanya goes away. we had enough of her already