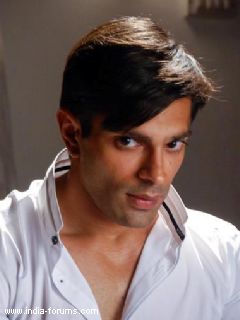 Though RaQesh Vashisth replaced him in the show but the ardent fans of Karan are still trying to get him back in the show by sending requests to the channel and the production houses. The fans are also sending hate mails.

Karan is overwhelmed to receive so much of love from his fans but in an exclusive chat with TellyBuzz, the much loved actor has urged his fans to stop sending hate mails.

Karan is extremely thankful to his fans who have supported him and showered their love upon him however, he is saddened to know that his fans are unnecessarily reacting to the situation and involving people for all wrong reasons, "I am very touched with all the love and support you all have given me but now we should stop irritating people who are not even involved in all these matters. Everyone reacts to the situations from their point of view but as better people we need to understand everybody's point of view before we can react. We are so spontaneous to react without understanding situations," he avers.

The dashing actor pleads his fans to stop sending hate mails and says that it is a time to move on, "Now you all shouldn't send hate mails or requests to anyone. Whatever will happen; it will happen for good. Thank you for all the love and support you all have given me and now it's time to move on."

We hope now Karan's fans will follow his words and we hope that the actor will be back on-screen with a bang!

nikki.171 6 years ago Its good to know he has said this to his fans. My respect for him has increased.
Its true you are sorely missed on Qubool Hai, also by me, but some people have nth to do with his exit and do not deserve the hate mails. Hope the fans read and HEED his advice!

YellowBoots 6 years ago Good to read this. One must move on. KSG, good luck for your next project. And please get a haircut :)

kareena05 6 years ago Thank you KSG hope to see you soon in another exciting project...and as a true fan i respect your choice

Revelio 6 years ago Miss u so badly Karan Singh Grover! U were awesome in qh! I don't hope for u to come back to the show anymore but u will always be Asad for me n no one else. U rocked in qh! :D

anjali9996 6 years ago miss you karan Singh Grover.
no Qubool hai at all without u
KSG U rock

luvsandhir 6 years ago Love u soo much Karan Singh Grover..miss u on screen..:((

avi_k_ 6 years ago miss you karan Singh Grover.
no Qubool hai at all without u

Rakul Preet Singh confesses to being a part of drug chats ...
8 minutes ago