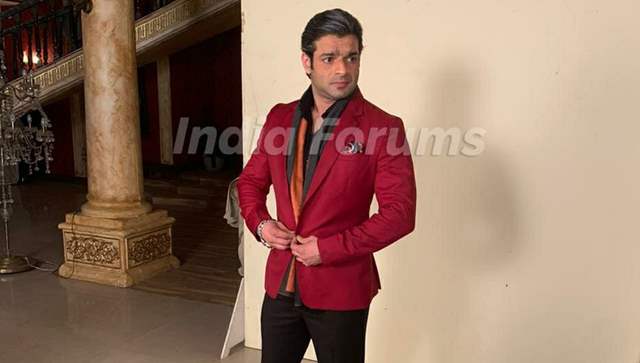 Ever since it was confirmed that actor Karan Patel will be seen playing Mr. Bajaj in Kasautii Zindagii Kay 2, there has been an instant excitement. Apart from the fact that shoots are resuming and things are getting back to normal (in work sense), this has been something to look forward to. After seeing in Yeh Hai Mohabbatein, Karan will join Kasautii as the new Mr. Bajaj.

In fact, Karan has shot with the team and India Forums brings you an exclusive picture of the actor from the set. We have been keeping you up to date with the shooting having resumed post lockdown.

Karan in an interview with TOI told that  Mr. Bajaj is an iconic character, and it has been in people's minds for many years now. So, it is an honor for him to get the opportunity to take the baton ahead from where, Ronit Roy (in the original Kasautii Zindagii Kay) and Karan Singh Grover (Kasautti Zindagii Kay 2)  left. He also mentioned how he will add his own nuances and essence to the character.

He will be replacing Karan Singh Grover in the show. Earlier there were reports that Gaurav Chopra and Sharad Kelkar were considered for the role but ultimately Karan bagged it.

ALUJNA21 1 months ago Something missing but still we need to watch him to give the final POV.

shakethebiscuit 1 months ago actor acha hai, but you guys need to give him more dialogues...ha na, aur silent looks all the time cant be the funda forever!

Neonholic 1 months ago He looks more hot in beard look. What is this ! This look doesnt suit him at all !

Pori 1 months ago Wishing him good luck He’s missing the oomph factor of the character of bajaj. 😕

_NINA_ 1 months ago Wish him good luck. Hope he will rock

Sutapasima 1 months ago Wishing Karan All The Best .. May you win lots of accolades as Mr Bajaj

ght_shona_4evr 1 months ago The Karan Patel will rock as mr.bajaj with his humor n witteness.

CINTAA ties up with Zindagi Helpline for combating suicides, ...
42 minutes ago

Sushant Singh Rajput Revealing about the Moment he Got Very ...
42 minutes ago