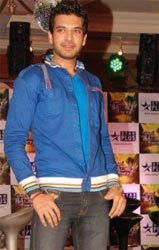 Karan Kundra is now trying to transform himself into a 'Dancing Star', and is putting quite a lot of hours on rehearsals for his upcoming show on Star Plus, Zara Nachke Dikha.

Karan talked to TellyBuzz about his initial fear for dance. "Initially I was afraid of dancing, because I am very bad at it (smiles). I am putting in quality time at rehearsals now, and I am so used to dancing, that my legs automatically start to move even when I am standing. I have now become a dancing freak, and think of it all the time".

But Karan recently had a setback to his grand preparations for the show. "I injured my knee while doing a stunt while rehearsing. I was forced to be in bed for three days, but I am now back on my legs and dancing again (smiles)".

When asked about the best dancer in the boys' team, Karan tells us, "All the boys are good in their own styles. Abhishek Awasthi though is the best and can do some great Biboying. Sushant Rajput knows Jazz well".

Ask him about his style of dance, and he is quick to say, "I am the best when it comes to comedy. So I will bring a comic element in my dance".

Well, we are indeed looking forward to your style of dance, Karan…

piamist 9 years ago i loved all your performances in zdk... i love Karan comic style dance

tanu111a 10 years ago @ madabtarmi our kk is king.he is so down to earth.he make his fans to laugh not feel bad.he is d king.dancing wid comic touch is most difficult.i m good at dancing but i cannot think abt it i no i cannot do.ur ksg can never do it. he can make us laugh due to his emotional act only.

Pranii 10 years ago whereever u are, there will always be laughter and fun- that's ur charm, luv u, u r the bestest Karan, u just outshine the rest by ur innocence and hope to see that in dance too. all the very best :)))

yipee 10 years ago hehe looking forward to his comic dances

anjallii 10 years ago sooo cute.... waiting for the show to begin