Karan Johar - the name in itself is enough for his introduction. When the King of Koffee comes face to face with the King of Friday's, Farhan Akhtar this week in Oye...It's Friday, there is no end to the steam less conversations... 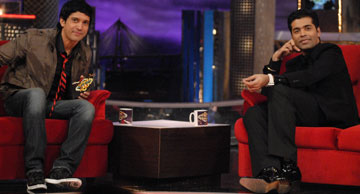 Featured Video
Stay Tuned as the two musketeers get down to their act with uproarious and out of the box one-liners, conversations, gags and a lot more action that you have never seen before. Its time for Kjo go under the knife as Farhan gets set to grill him like Kjo used to on his show… 'It's pay-back time!'

However, Karan Johar, the man who is a dream director for any Bollywood actress today, was dreaming about only one actress, Sridevi. He talks about his favourite actress with Farhan Akhtar on the show.

"As a nanhe karan, he has grown up watching her movies. Every Friday after school all his friends would gather at his house. Karan would put up a grand show for all of them with all of Sridevi's awesome numbers," says our khabroo.

Adding to this, our source states. "His favourite song those days was 'Ta Thaiya Ta Thiya Ho' where the southern serene danced alongside jumping jack, Jeetendra surrounded by thousands of pots." With this the hot and sizzling Shamita Shetty gives the dose of nasha as she grooves on sister Shilpa's chartbusting numbers like 'Shut and Bounce' and 'Mind Blowing Mahiya'.

There is lots more in store for viewers as they watch Karan revealing many memories of his childhood moments on the show.

Catch this and a lot more action as Farhan puts Kjo in the spotlight this week on Oye! It's Friday! February 20th at 10pm only on NDTV Imagine.

rinni 13 years ago While our media made people beleive that Sridevi was forgotten. KJo did a great job in his show Koffee with Kjo. He proved that there is only one actress who still lives in the heart of bollywood and that is
S R I D E V I. Ask Kajol, Kareena, Karishma, Preity, Juhi, Ayesha Takiya, Shilpa Shetty, Asin, from the stars to To bes..ask them who s their ICON and their is just one answer S R I DEVI aka the ultimate.

+ 4
13 years ago For his next film Karan should persuade Sri Devi to star in it. It would be a real scoop for him as Yash Chopra has been trying to get Sri Devi back to acting for a long time.