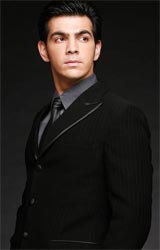 Karan Grover aka Kayjee might have been shown as dead in Rajshri Productions and Sahara One's Woh Rehne Waali Mehlon Ki, but the actor has surely become one of the favorites of the production house.

Yes, you guessed it right!! The actor will now be seen as the male lead in Rajshri Productions' recently launched show on Zee TV, Yahan Main Ghar Ghar Kheli. The show has opened to very good ratings, and will focus on the first major twists in the tale.

According to our source, "Kayjee is the personal choice of both Sooraj Barjatya and Kavita Barjatya to play the lead in the show. The guy will be the son of the rich man who wins the bid for Swarn Mahal".

As reported earlier, Shishir Sharma will play the father of the male lead. He will be shown as the old enemy of Thakur Uday Pratap Singh (Alok Nath), and he will successfully buy the Swarn Mahal, and will eventually throw the entire family out.

"Kayjee who plays the son of Shishir Sharma will eventually fall in love with Aabha (Suhasi Dhami)", adds our source.

However, when contacted, Karan Grover aka Kayjee said, "I have no idea about the male lead who has been finalized. I have just auditioned for the show like many others, and have got no confirmation".

We tried calling Producer Kavita Barjatya, and even sent her a text message, but she remained unavailable.

natalie-eyes 12 years ago Its a great show I luv karan in this show, keep it up, I do not miss an episode. Karan ur sooo cute, wow....

+ 2
12 years ago karan and abha's pair is superb. i love both of them.karan is soooo cute ,just perfect for abha

12 years ago karan grover is so cute in yahan mein ghar ghar kheli.

13 years ago i m big fan kay jee. he is very good actor. he is right choice. now i will be watching yahaan main ghar ghar kheli only becoz of karan grover.

13 years ago wow i m happy ,i also miss sarrthi...it was one of my fav show...when he n neha(bhabri) was thr... i wish neha also make her cm back thru any show

+ 6
13 years ago Good.Now this show will be more interesting to watch.